Show Title: A Gentleman’s Guide to Love and Murder

Content Rating: 15+ (the script is fairly high brow, and there are lots of adult themes: murder, mistresses, cross-dressing, innuendos, etc.)

Should I pay full price for tickets: No. The highest balcony seats are about $40 (or they were when I went), and they were pretty good seats. Unless you are deathly afraid of heights, these are decent seats.

Based on Roy Horniman’s novel Israel Rank, A Gentleman’s Guide to Love and Murder finds Monty Navarro, a British commoner, discovering that he’s ninth in line to inherit the Earldom of Highhurst and electing to murder the members of the odious D’Ysquith family standing in his way. In the process Monty keeps a mistress, Sibella Hallward, and courts the comely young Phoebe D’Ysquith.

I was very excited to see Gentleman’s Guide because it was new, it was (at the time) nominated for a boat load of Tony Awards, and the one scene I had seen (I’ve Decided to Marry You) was hysterical.

I saw it four days into my New York trip, and it was the fifth show I saw. I was exhausted. It was a Sunday afternoon, I was sitting in the highest balcony of the theater, and I had to fight to keep myself awake. Not because the show was boring. I kept telling myself “you are sitting in  a Broadway show, you are NOT going to fall asleep”. Especially since I was really enjoying the show. That’s how tired I was. Sigh.

Anyway, this show is BRILLIANT. The script is wickedly clever, the music hearkens back to the Golden Age of musicals, and the acting was insanely amazing. While there were no big song and dance numbers, and no terribly elaborate sets, the script more than made up for the lack of spectacle.

Did I say it was hilarious?

Because Gentleman’s Guide was hysterical. I laughed more at that show than in almost anything I’ve seen. It’s full of that biting British wit we Americans so love to see. The gist of the show is this guy learns that he’s actually in line to become a very wealthy Earl…except there are eight people in line before him. Of course, he decides the only option is to systematically kill all of them.

Scenes like the song pictured above show the hilarity of the tone of the show; Jefferson Mays as one of the many D’Ysquith’s is out skating with a woman, while Monty follows them, attempting to kill Mays in whatever way possible. He obviously thinks a saw is the best way at this point.

Did I mention that all eight of the murdered are played by the same guy? This gentleman, Jefferson Mays plays the entire D’Ysquith clan, both men and women. And the effect is hilarious. 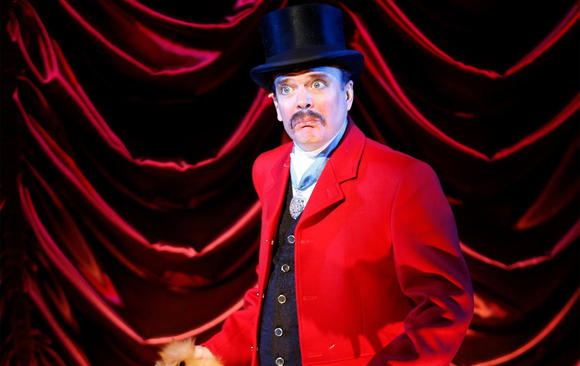 One minute one of his characters gets murdered and LITERALLY less than 15 seconds later, he tromps back onstage as someone else. It was insane. His characterizations were all so different, and it was so fun to see him navigate the different characters. Truly an exceptional performance.

Here he is as one of the D’Ysquith women:

I would like to take a moment to point out that while Jefferson Mays has an incredible performance playing the dearly departed D’Ysquiths, Bryce Pinkham is the driving force of the show as Monty Navarro, and hasn’t gotten nearly as much recognition as Mays. His comedic timing is spot on, his singing beautiful, and his manic attempt at killing everyone quietly comes across as hilarious and almost loveable rather than creepy.

Gentleman’s Guide is largely an ensemble show, and the ladies are just as powerful as the men; Lisa O’Hare plays the seductive Sibella, who is sleeping with Monty behind her husband’s back. Lauren Worsham is adorable as Phoebe, Monty’s other love interest. My very favorite scene in the whole show is a merry dance between these three; check out the wildly entertaining “I’ve Decided to Marry You”:

A Gentleman’s Guide to Love and Murder won the Tony for Best Musical, an honor which it greatly deserved. The show currently has no closing date; if you’re going to be in New York any time soon, you absolutely MUST see it.